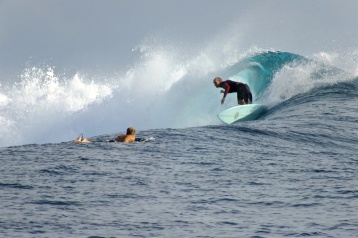 There are always down times between surf sessions ….enter Phil aka Fingers.  I have had the pleasure of sharing four of my surfing adventures with him …always memorable.

I have to admit that travelling around Indonesia wth Fingers seems to coincide with stomach issues but not from reactions to the local food or water but from extended sessions of deep belly laughing. He keeps us in stiches regaling stories and then the rest of the time it is either just laughing with him or at him for simply him being him.  Someone once said that you don’t remember the days in your life but the events that you experience, I have numerous memories dotted through our travels where he had me in stiches…I remember them all.

The world according to Fingers, the stories of the life, some true, some not so true but always entertaining.  At times the verandah of our rustic accommodation became a stage for “Awera’s Mister Phil”, the David Letterman of Awera.  There he would sit, leaning back in the blue plastic chair sharing stories from his youth in Victoria, the life and times on the Gold Coast and everything in between in no particular order at all.   At times you felt you could have been a guest on the show being interviewed about some moment in time or event you had shared with him.

There is also a thinker in Fingers who likes to discuss the deeper philosophical issues of life.  Awera has long white sandy beaches where the only sounds are the odd screeching bird and the gentle lapping of waves crumbling on the shore, a great environment for free thinking.  I would like to state that I am sure that on some of the strolls along the beach, we probably solved the problems of the world but before we documented them for the greater good of the planet, we would get distracted by a group of hermit crabs on the beach and end up pondering what life would be like if we carried our home on our back. 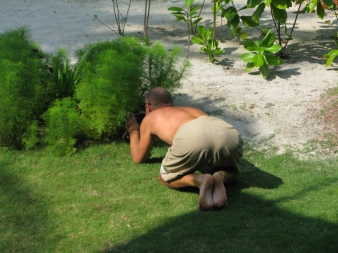 There is also Fingers the Photographer.   On the 2012 Awera trip, Fingers was our David Attenborough focusing on the local insect population.  Now the cameramen working for David Attenborough has much more sophisticated equipment than our budding lens man and also take into consideration the flighty nature of the chosen subject but his determination was both intense and amusing, mainly when just as he was about the click the subject would again evade him.

Creative Fingers.  He doesn’t like to be idle and has a creative side and we were very lucky that on this trip he had decided to make a woven hat made from a palm frond.  On one of his previous trips he brought back a ceremonial woven hat from West Timor and he had always spoken about making one.   The end product was a masterpiece and a great reward for his enthusiasm and his sense of style.  I am not sure where the first Awera Ceremonial Headdress is today and whether it is being used in some formal capacity but I can say I was there when the tradition was started. 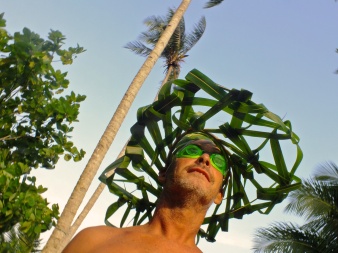 And the reason we are at Awera, there is Surfing Fingers, the natural footer from suburban Melbourne who started later than some but is still charging. Our paths first crossed around Wonthaggi, Victoria sometime in 1982 and my life has never been the same since.   Thanks Fingers for adding colour to my life and it is time to start planning for our next surf adventure!